Much of Part A of the Approved Documents of the Building Regulations is taken up with ‘how to design a basic masonry building without needing to employ a structural engineer’.

A lot of this content is shared with BS8103 – structural design of low-rise buildings, a little known design code hardly used by design engineers.

I don’t know which came first – was BS8103 based on Approved Document A or vice versa, or were they written together?

The gist in building design is that if a building is built to the layouts and material requirements of Approved Document A, a structural engineer shouldn’t need to be involved.

However, I have a theory that when BS8103 was written, it wasn’t anticipated that people of the 21st century would like open plan spaces and glazing such a lot.  One of the limitations on layouts is to do with openings and Approved Document A is surprisingly conservative on widths of openings that are allowed. 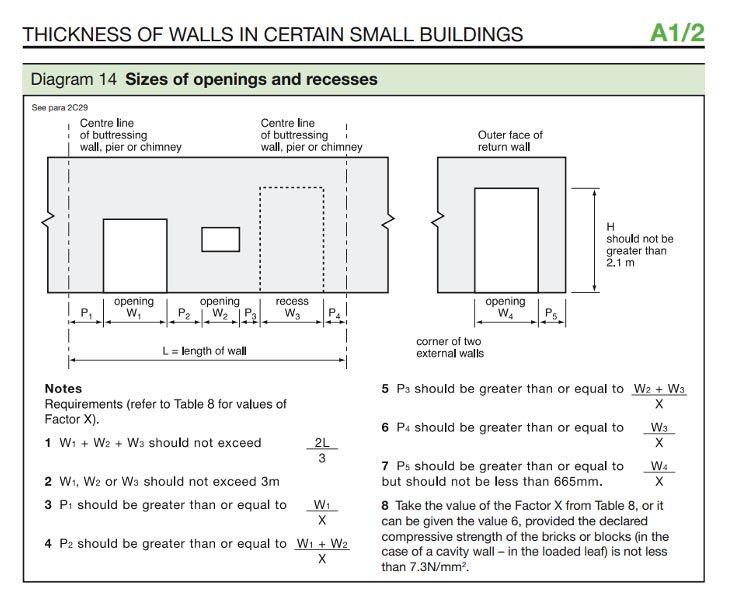 The above is an extract from Approved Document A and it can be seen in Note 2 that an opening should not exceed 3m in length.  I don’t know where this limit comes from; I could probably find out if I trawled through back copies of the IStructE or researched with their librarian.  However, historically, door and window opening were created with brick arches and it is rare to see window openings much bigger than 2m in older houses.  So, there is a possibility that this limit stems from tradition.

There is also a possibility that the limit stems from the general misgiving that too many large openings and not enough wall reduces the capacity of a building to resist wind load and vertical loading, and 3m was considered a sensible limit to ensure buildings were sufficiently strong.

What is certain, though, is that if a building has an opening of 3m or more, it falls outside the scope of the Approved Document A layouts and a project manager should be expecting to see a design by a structural engineer for a suitable beam.  The structural engineer should also be checking that there is sufficient masonry support to the beam and that the racking capacity (stability) of the building is not compromised.

Always check with your Project Manager before starting any works